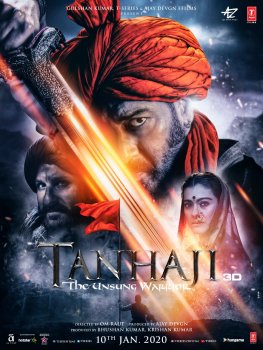 As the Marathas waged war against the Mughal Empire in the early 1700s, the fort of Kanhagarh  (Sinhagad District) became a strategically important empire to protect. With Delhi under Aurangzeb already, the ceding of the Kanhagarh Fort would have meant complete colonization of India, right till the Deccan. And such vicious were the ambitions of Aurangzeb as well. Tanhaji Movie Duration is 2 Hours 13 minutes.

Tanhaji Malusare (Ajay Devgan), a General of the Maratha Army under the leadership of Shivaji, emerged as a true Hero and foiled the plans of Aurangzeb. His Army General Udaybhan (Saif Ali Khan), valiant and cunning warrior himself, waged a war, both tough, with odds against the Marathas. Tanhaji, despite his personal commitments for his son’s impending wedding, fought till his last breath to protect his oath to serve his motherland.

While Savitri’s ( Kajol) role is fairly limited, she shines through the limited portrayal as a committed wife, who believes completely in the bravery of her husband and supports him wholeheartedly. Even after Tanhaji is martyred, she fulfills his last wish of her dressing as his bride. Tanhaji movie budget is INR 125 Crore.

Tanhaji Movie Review– The War of protecting one’s Motherland from the vicious intentions of Aurangzeb, the colonizer

It is imperative to state that this story is unheard and Tanhaji, indeed, is an unsung hero largely. However, the stark resemblance of the plot of this film, to the Hindi Feature Film Panipat can not be ruled out. That Marathas were a brave race, who warded off multiple efforts of Mughals to colonize beyond the Vindhyas, is a known fact.

To state that the performance of a seasoned actor like Ajay Devgan is outstanding is a given. He fully justifies his protagonists with elan. A special mention, however, is required of the CGI effects that the battle sequences portray. They appear a bit forced and required greater technique perhaps.

The music is largely a non-entertainer, with Tanhaji songs and lyrics hailing the Maratha Empire even when the occasion could have carried other emotions in the lyrics. For example, the song where Tanhaji’s son’s marriage is fixed could have been largely about a father’s elation, rather than his pride in the motherland.

The portrayal of Mughals as a barbaric race, while oft-repeated as a portrayal in Bollywood Cinema, is historically inaccurate. Cinematic liberty is ok, but the over barbarism could have been done away with. Slicing, roasting and eating Alligators, really?

Saif Ali Khan is repeating himself, and we have seen him in better nuanced and etched roles. A simple role as a Naga Sadhu in Laal Kaptaan had far better shades to his characters and he carried it rather well.

Kajol, an actress of that caliber, is hugely wasted in this film. Though she shines in her limited portrayal as a committed wife of Tanhaji. Luke Kenny as Aurangzeb is believable and restrained.

Tanhaji, with Box office Collections of INR 367 Cr, ran well due to a dedicated fan following of Ajay Devgan, Saif and Kajol, promoted well in the trailers. Pakaoo Rating of the film is 7/10. 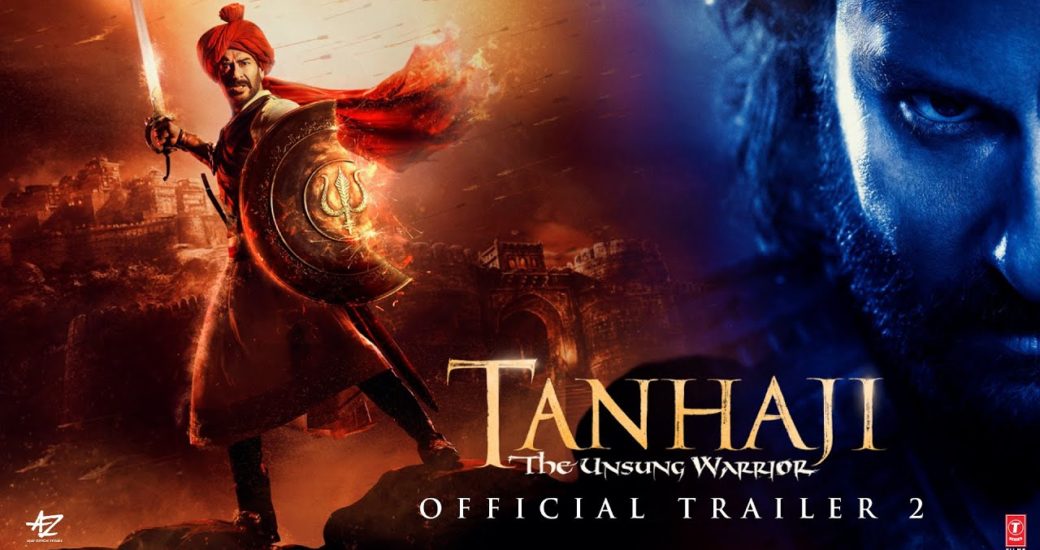