Aha Original Film Run released on May 29,2020. Run stars Navdeep, Amit Tiwari, and Pujita Ponnada and is directed by Lakshmikanth Chenna. The film released on May 29, 2020, and is now streaming. It has a duration of 1 hr 27 minutes (87mins).

Sandeep and Shruthi get married and start a new life, despite knowing that Shruthi is unable to bear a child. They plan for a lunch date on their anniversary. Sandeep, waiting for Shruthi, receives a call from Shruthi’s mom and the plot twist that ” Shruthi is dead”.

Baffled, Sandeep runs home and finds Shruthi’s neck slit. Police then starts suspecting Sandeep. Sandeep who runs to prove his innocence kills Aneendra who knew the truth. Meanwhile, Sandeep’s colleague and Shruthi’s Boss start privately investigating Sandeeps’ character. They find out that Khaleel, Baba, and Rosy are imaginations created by Sandeep, to rescue himself from danger. The plot turns out that Shruthi is murdered by Sandeep, who is suffering from multiple personality disorder.

Aha original film Run is another Telugu movie on OTT Aha, starring Navdeep. It is a Crime Thriller full of twists. Good to see such films being promoted on OTT, as it pushes the creative writers in Telugu Film Industry. Aha has done a colossal collaborative in introducing Telugu Web films directly on the screen.

Director Lakshmikanth Chenna has done brilliant script work on Aha Original Film Run. The script is very well written and narrated. The narrative style of the director is very much alluring as the twists get disclosed as we move forward, without any lag. The cinematography of the film does not reach expectations. Cinematography seems merely a bark on the tree, as it does not add much to the film and fails the movie.

Navdeep as Sandeep leading the film has done a tremendous performance bringing out the negative shade in his skin. Navdeep is the crux of the film, finishing in style.  Amit did the best in his role. Shafi, Kausalya, Poojitha hardly had a role.

Despite the huge cast, many huge characters hardly had a role. The film seems to be released in haste. There are many scenes where the film is predictable. The web film could be extended with good use of the cast. The dialogues in the film are terrible and do not intrigue like many crime thrillers. The dialogue delivery is appalling as veteran actors did not reach the mark. Music does not pay a cent to the thrill. Music plays a crucial role in Crime thrillers in intensifying the scenes. 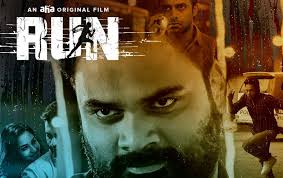