Ponmagal Vandhal Movie Amazon Prime is a neatly crafted story told in a gripping way. It lends voice for the unheard. How an aspiring vulnerable single mother’s dream is demolished? How easily weak and downtrodden women are victimized at the hands of power and affluence? How the whims and fancies of rich and powerful people influence the Government machinery, judiciary, and finally the society?  How difficult it is for a weak and downtrodden woman to fight a society fixed with a stereotypical vision on a woman? The film portrays all the answers poetically. The debut director JJ Fredrick deserves applause for his daring effort.

Jyotika has given life to the character Venba and a daring role indeed. She, in her dual role as Jothi, portrays an aspiring, vulnerable single mother raising her only girl child. “Struggling and losing may be acceptable in a game, but in justice?” you can find such good dialogues throughout the movie. Each and every gesture, words spoken and scenes are crafted like a sculpture in Ponmagal Vandhal Movie Amazon Prime.

The scenic locations and good camera work are laudable. Daring effort is used in the sense that not only Ponmagal Vandhal movie OTT release amidst protests from theatre owners association but also the way in which the film portrays the legal battle waged by a traumatized orphan girl. She has nothing else but the truth to her backing. Ponmagal vandhal movie OTT carries great work by the cast and crew, neat and daring script, and a “Must watch tag”.

It is the first Tamil movie to be released on OTT. It is released on May 29, 2020 on Amazon Prime.

Ponmagal Vandhal has a decent music score and good lyrics.

“Vaan Thooralgal” sung by Chinmayi and

“Kalaigiradhey Kanave” sung by Govind is musical, lyrical and visual treats to cherish.

One interesting fact is that top five male actors in the above list are also directors.

Ponmagal Vandhal (Precious girl arrived) is a Tamil legal thriller drama film directed by JJ Fredrick. It is the first Tamil movie to be released directly on OTT platform due to COVID 19 lockdown. Ponmagal Vandhal premiered on May 29, 2020 on Amazon Prime directly. It is from 2D Entertainment, a company owned by real life couple Suriya and Jyotika.

“Petition” Pethuraj is a social activist, famous in Ooty for his legal battles. He rakes up an old murder case involving two youths, few young girls and Jaipur Jothi, a psycho-killer from North India. It was a sensational case fifteen years back. The case was handled by Alexander, a DSP ranked officer now. The case was closed with video footages showing Jothi gunning down two youths.

Jothi is arrested and encountered by police. Everybody mocks “Petition” Pethuraj and his lawyer – daughter Venba Pethuraj for trying to get cheap publicity by raking up a sensational criminal case since it is her first case. The people and women activists abuse, humiliate and even throw slippers at her. She succeeds in disproving Jothi’s alleged North-Indian identity. Her progress in the case unnerves a few. Renowned lawyer Rajarathinam comes into the picture.

His arguments tilt the balance in favour of defense side. Venba’s main witness SI Suresh Pandiyan commits suicide. Venba is at cross roads. Who is Jaipur Jothi? Who is the main culprit? What happened exactly fifteen years back? How Venba is connected with the case? Will Venba untangle the knots and twists to win the case? Will Justice prevail? Watch out for Ponmagal Vandhal full movie on Amazon Prime, which released on May 29, 2020, directly on OTT platform. 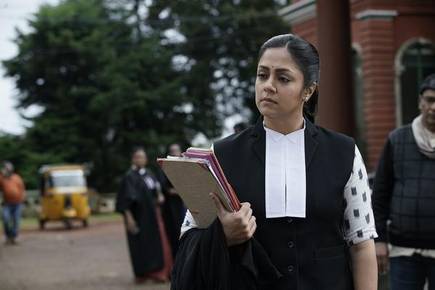