Keeping in mind the flourishing trend of the gangster lifestyle and their emotional dimensions, Raktanchal Web Series 2020 is another delectable approach, where it clearly portrays how one murder gives birth to two murderers—one who kills and the one who starts preparing for vengeance.

The script of Raktanchal Web Series MX Player has a lot of punch and good material to complement the well-designed and perfectly characterized story of the series. The dialect, although monotonous at places, but absolutely substantiating, coupled very well with the backdrop of the series. Not only blood and weapons—gang wars can sometimes be fought straight from the heart. This message has been strongly delivered through the script and equally enthralling screenplay.

Kranti Prakash Jha ruled the screen throughout with his intense expressions and captivating eyes. He fought from the heart but didn’t portray softness in a very big way, and hence nothing portrayed by him stood to be a misfit for his character. Pramod Pathak’s work is equally commendable and his way of supporting the primary character is worth appreciation.

Ronjini performed very well in delineating the different shades of Seema and her presence of mind also reflected in her eyes which displayed different shades of expressions with the transition of scenes. Vikram Kochhar’s work is also worth mentioning, but his performance could have been a little cleaner. But the one who stole the show even with appearances in short intervals is none but Nikitin Dheer.

When Vijay Singh fell into the river from the bridge, a series of expressions quickly flashed on his face. His dialogue delivery, silent expressions, and perfect movements undoubtedly made a mark on the screen.

Mannan Munjal showed great expertise in designing the background scores for Raktanchal Web Series 2020. Thrill and vengeance screamed through the series, emanating from his musical arrangements.

With Vijay Mishra as the DoP, the cinematography of Raktanchal MX Player was completely bewitching. From coal mines to the fight scenes, everything was shot beautifully. Faizal Mahadik and Imraan Mahadik could have done their work as the editors with a little more insight into the transitions of scenes.

Raktanchal MX PLayer is a multi-dimensional story. The initial episodes seemed to stretch with a common trend. But as the story progressed and new characters were sculpted out, the series took its pace and opened up platters of thrill and enthusiasm. However, the anonymous appearances of Vijay Singh could have been a little more convincing. Ritam Srivastav did a very good job as the director of Raktanchal Web Series 2020.

Raktanchal web series 2020 based on an initially common plot of gang wars based in Banaras (Varanasi), where two gangs headed by Wasim Khan and Vijay Singh are considered rivals. The story takes its beginning shots in the Government tender allotment sector, where Wasim’s gang arrives like every other year to bribe the concerned officials.

Vijay Singh, a new name who is recently found to antagonise Wasim in every possible way visits the same with his people, beats Wasim’s men black and blue, and threatens the Government officials to re-allot all the tenders of alcohol in his name and ensures that this trend continues. Wasim has the hands of Pujari Singh, a political leader of the ruling party from the constituency of Ghazipur, on his head and with this political backup, he rules the tenders of all businesses—from road construction to the coal market.

The story takes leaps of flashbacks to sculpt out Vijay’s background and his transformation from a Government job aspirant to the rival of Wasim Khan. Vijay’s father Virendra Singh, was killed by Gullu Singh, one of Wasim’s men two years ago when he tried to voice protest against the existence of the illegal coal mine and asked for compensation for the families of the workers who died there while working.

Soon after that, Vijay avenged his father’s death by killing Gullu Singh in his coal mine with the help of his uncle (Virendra’s brother) Bechan Singh. During his imprisonment, Vijay befriended Tripurari after the latter saved his life from one of Wasim’s appointed killers. Tripurari worked for Sahib Singh, a political leader from the opposition party of Pujari Singh.

Sahib Singh got both Vijay and Tripurari out of the prison and since then, the gang rivalry shone with new colours. Things shoot up when Wasim’s men eye on the family members of Vijay and as a result, Vijay’s sister’s marriage falls apart. Post avenging that, Vijay finds out that Wasim is unable to provide refined coal to the dealers and the previously popular raw coal is soon going to be out of business.

When Wasim fixes up the business with Sanki Pandey and makes his right-hand man, Vijay also tries to set up his business in the same coal market but fails. Meanwhile, Sahib Singh defeats Pujari in the Ghazipur election with the help of Vijay; but soon after that Wasim heats up a Hindu-Muslim riot in which Tripurari loses one of his arms and Sahib is burnt alive. Pujari’s chair gets restored once more.

Chunnu (Bechan’s son) along with Tripurari falls in a trap laid by Wasim’s men and Tripurari is shot dead. Incidentally, a lovely couple, Katta and Seema (Item Bomb) start working for Vijay and Seema is entrusted with the responsibility of luring Sanki in her false love, but Wasim comes to know about the plan and Sanki threatens Seema to convince Vijay to come and meet Wasim alone.

Pujari’s death in the hands of Vijay was followed by a series of blatant murders in a marriage ceremony, laid by Wasim and his men, but preached in the name of Vijay. On their final encounter, Wasim shoots Vijay and he is taken away by the river and the rest of Purvanchal including Vijay’s family believes that he was dead. However, the last minutes marked the beginning of another twist in the story with a clear hint of Season 2. 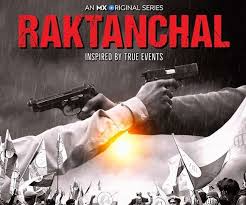