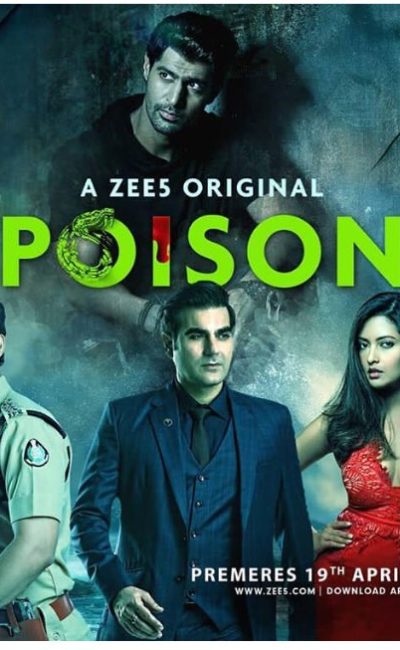 Watch Out this space for Poison Web Series Season 2 Review. Meanwhile, for the fans who would like to binge-watch Poison Season 1, the Review is as below.

The story of Zee5 web series Poison one of the best crime thrillers delineated through web series to date. The story opens with the spree of killing—Ranveer being the central character of the story. This mission takes him to Goa, where soon he sets up his business by buying a bar. Soon after owning the bar, he gets familiar with the family of police officer ACP Vikram.

While another set of cops is in search of him, Ranveer begins to date Ashu and Jahnvi, the two sisters of Vikram. Meanwhile, Ranveer’s ownership of the bar makes him fall into deep trouble and his name gets enumerated in the red list of Antonio Verghese, a don who understands the language of death even better than his own mother tongue.

Poison Web Series All Episodes are available for Streaming on Zee5.

Poison Web Series Zee5 Review: A punch of action, a ray of thrill

Poison is a well-researched project as far as its connection with reality is taken into consideration. With a good directorial approach and fine choreography, Poison stands to be one of the must-watch list items for action lovers.

It would be wrong to call the script of Poison absolutely pathbreaking. Rather it did have a predictable character from the very beginning. Yet, what makes Poison gain an appreciation for its script is the appropriate use of dialect and also the fact that the script gels well with the plot of the series. In addition to that, reality sparked through different angles of the story, and the framing of dialogues and monologues is very much responsible for the success of Poison.

Arbaaz Khan’s formidable appearance in the series adds up a lot more spice to the entire screenplay and its execution. His portrayal of the cold-blooded don is more than what we call just amazing. Tanuj Virwani also managed to bring out the real character of Ranveer through his skills. But what Freddy Daruwala did, was absolutely beyond our expectations. His performance made the viewers crave for much more of his work in web series.

Sanchit Balhara’s work in the music of Poison has made situations of delectable mood-matching in the synchronization of the script and the screenplay. From the melodious point of view, his work might have some room for criticism. But as far as the needs of Poison was concerned, the purpose was fully served.

With every twist and turn, cinematography just got better and better. Yogi Sankotra did excellent work in this field of Poison. However, editing by Abhijit Deshpande was not up to the mark.

Jatin Satish Wagle, the director of Poison showed good work of research in planning and visualizing the entire setup for the series. It might appear that the story was stretched at some point through 10 episodes, action spoke for words. However, a little more attention could have been paid to costumes and makeup. The death of darlings was the most unique aspect of this web series.