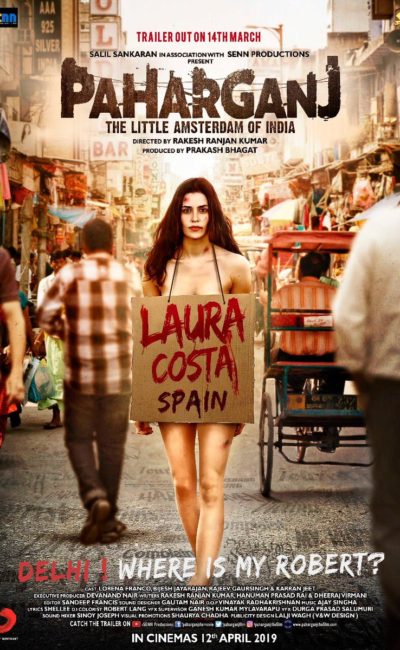 Paharganj Film on Netflix chronicles the quest of a Spanish Woman,  Laura Costa , essayed by Lorena Franco, for her partner and lover Robert. She lands into India, with the only last know Facebook updates pointing to the knowledge that he was staying around Paharganj in Delhi.

Simultaneously evolves the track of a Basketball coach, Vinayak Srivastava, essayed by Karran Jeet. He lost his only younger brother to a local MLA son’s Jitender Tomar’s greed and envy. He feels lost in life and is generally losing grip on his life.

Point blank murder of Jitender Tomar (Karan Soni) , and thus unfolds a High-level investigation and whodunnit. How the lives of Laura and Vinayak are entwined?  How are they both connected to Munna (Salman Khan), a local small-time goon in Paharganj lanes?

Paharganj Movie Review – While many a stories have talked about Old Delhi, West Delhi, heck, even South Delhi, it is amazing how Paharganj Movie story stayed untold for so long.

The Paharganj of the hippie International tourist depicted and how! In Paharganj Film, the hero is the shoot location. Honestly, it would not have mattered what story was put into this place. This story needed a tell for its depiction of the hippie land of Paharganj, which is even today ignored by many a Delhites, local residents and administration in general.

The depiction “may” be an exaggeration, but that is not the point. For those who are familiar with this area of Delhi, will agree that Delhi Railway Station, straight opening into the lanes of Paharganj, serves as a “safe” haven for many a wandering low budget international tourists esp.from Europe and USA.

There is ample underground activity peddling in drugs, flesh trade, liquor, illegal Betting, and Trading racquets,  and a whole different world ignored by many locals in the name of a tourist destination. Beneath the surface of a bustling goods and trade markets, lies a different world altogether. You get the gist of the mileu of the Paharganj Film.

Vinayak as the lost brother who has lost his younger brother , emotes and justifies his expression of grief and loss very convincingly on screen. His wife Pooja Menon (Neet Chowdhary ), though her role is small, also impresses. Laura Costa Paharganj Movie ( Lorena Franco ), essays a strong role of a lady in love, searching desperately for her partner in the bylanes of the rather convoluted Paharganj, raped, tortured by the local police refusing to lodge her complaint, and finally generally cooperating with the Police investigation later in the story. The other character artists like Munna, the orphan, and local goon also impresses with his performance.

Paharganj Movie Songs are mostly centered around the portrayal of the grief of loss and desperation of a search for a loved one. It is interesting to see a Hindi song being picturized on an obviously international actor. The background music enhances the overall hippie feel of the Paharganj movie story.

Finally, the Director’s find and the vision in placing his story, which could have been told anywhere , right in the bylanes of Paharganj is commendable. His choice of cast is also just right and altogether the outcome is worthy of a stream.