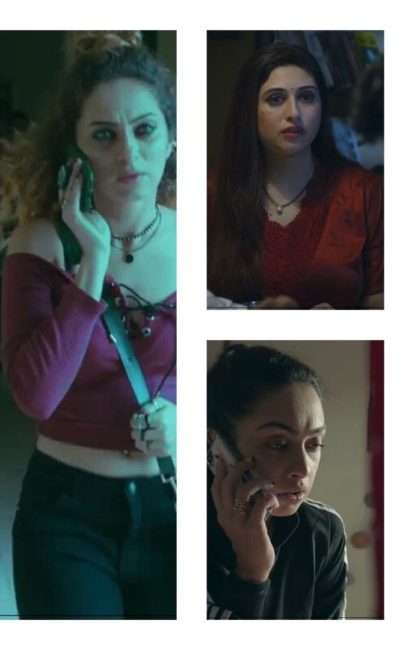 Life is a what we make of it, with the choices we make. In the era of social media and online presence, we are bombarded with imposters on the internet. Kashmakash Web Series on MX Player is a 5 episode anthology of short stories encapsulating the premise that online, self-regulation is very important. Given the open medium and ease of posting content, it is the onus of the internet user to be responsible for their own safety. Kashmakash web series release date was February 25, 2020.

Episode 1 is the story of a girl, Jiya, who is a kleptomaniac and aspires to be an influencer. She once gets caught on webcam, in a shop stealing an artifact. And thus starts her journey of being blackmailed into wrongful acts by the shop owner.

Episode 2 is the story of a “Rampur Rocks” whatsapp group admin. He irresponsibly posts rumors and wrongful information on the group, which influences many individuals to take misinformed actions or decisions. He also takes out personal revenge against a momo seller , linking momos to spread of AIDS, which is an unverified and incorrect information. His girlfriend does not take even a second to turn his own rumor to save herself, when caught in a compromising act by her father and community.

Episode 3 starts with a Housewife talking flirtingly on a Chat App. What starts as harmless flirting for simple fun, engulfs her entire life as her stalkers find her home and start insulting insinuations in her actual life. When her Police Inspector Husband gets to know of the situation he feels so embarrassed, that he commits suicide to escape the public ignominy. Her whole world comes tumbling down.

Episode 4 “Puff Puff Pass” showcases a young drug addict given a choice to expose the peddlers in her college. Her caring boyfriend actually gives her a chance to become clean and continue their relationship, provided she stops abusing her body. However, she wrongly chooses to continue with her drugs and soon, is engulfed by them. She even realizes that her College Principal is hand in glove in the entire drug nexus, but does not inform anyone about it. In the end, she is thrown off from college building by the peddler, who is a college peon.

Episode 5  depicts a young TV Celebrity Couple out on a date at a secluded place, which they call “The Hidden Gem”. The boyfriend is used to of going LIVE on his Social Media Accounts, which the girlfriend does not always agree with, but plays along. In this getaway that she plans, the boyfriend actually shares the LIVE location of the secluded place. Miscreants  with ill intention reach the place and try to molest the girl. Both of them are killed by them.

Kashmakash Web Series showcases one of the key issues of millennials and Gen Y – “Safety over the internet”.

Brought up by a generation which grew up on landline phones, early Television and very early internet, this generation is exploring the explosion of multiple social media outreaches like Influencer Marketing, sharing LIVE Locations, harmful dating apps, spurious Chat Apps, viral videos and wrongful information, and what not.

Kashmakash web series cast is varied and played out by multiple character artists, who have all carried their roles with sincerity.

At the cost of sounding pedantic, Pakaoo recommends Kashmakash Web Anthology to individuals of all ages. It is important to understand the harm that Internet may bring, if used irresponsibly. The reason being, that one is completely unaware of the real intention of the social media interacter at the other end. It is a “must” to reach out for help from well-wishers at the right time. There is no room for doubt, what does not feel right, must be wrong. The internal hesitation of social ignominy needs to be overcome and help sought in case one is being harassed in any way by a social media acquaintance or otherwise. Pakaoo Kashmakash web series rating is 7.5/10.