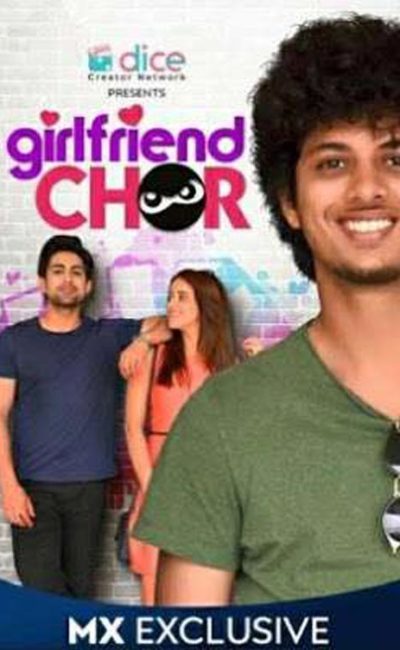 The story of MX Player web series Girlfriend Chor is a story of love triangles, or to be very specific, quadrilaterals of love. Akaash and Neha are best friends, while the former develops feelings for the latter, Neha being completely unknown and ignorant about it. Soon after her break up, just when Akaash made up his mind to ask her out, Neha informed him about her acceptance to Vishal’s proposal.

The female counterpart of Akaash’s sad story was shared by Ritu, Vishal’s best friend who went through the same situation. Mohan and Sunaina, Akaash’s parents happen to be very good and especially Mohan did not want his son to remain as the ignorant angle of love triangles. So, he decides to help both Ritu and Akaash, so that Neha and Vishal break apart and these two passive one-sided lovers get to be happy with their loved ones.

But in the process, Akaash starts feeling for Ritu. But Ritu continues to stay dedicated to Vishal and just a few days before she was leaving for a new job offer in Delhi, Vishal broke up with Neha and proposes Ritu, which she accepts. While Ritu gets her love after all hard work, Akaash once again is thrown back to the same point where this story began. This entire story took Sunaina to her teenage days when she was possibly in love with Suhaas, and Mohan was the “third person” who intervened and “stole” Sunaina from Suhaas.

Girlfriend Chor Season 1 is a crisp and compact story with not more than 5 episodes. It deals with the sad yet true story of human beings—their habit of making mistakes and repeating them again and again.

The script of Girlfriend Chor Web Series is not something extra-ordinary, but it gels with the plot very well. The conversations between Ritu and Akaash, Mohan and Sunaina as well as the one between Vishal and Ritu—all of them were meaningful and appropriate at the same time. These days modern love stories are labelled in a different way, where sex comes first before even holding hands perhaps. But Girlfriend Chor breaks that stereotype and focuses on silent emotions and well-executed narratives.

In a nutshell, Mayur More simply acted through his eyes, and perhaps his entire face. His eyes, change of expression, everything coupled with the character so well that even if the character of Akaash was given a quarter of the total dialogues assigned to him, he would have brought out the character in the same way. Shishir Sharma was expectedly mind-boggling in his performance. The one target determination was expressed well through Diksha Juneja’s work. Ashish Vidyarthi was also quite good as far as his small special appearance is considered.

It won’t be very correct to say that background scores and songs have played a very important role in Girlfriend Chor. Sanchit Choudhary has done a good job in the music of Girlfriend Chor Web Series. But the brevity and to-the-point flavor of the series did not require extra work of music.

Shashwat Saxena was very good as the DOP of Girlfriend Chor. The cinematographic aspect of this mini-series was looked after quite well despite limited scope. Amit Malhotra also proved that although it is very difficult to edit mini-series because it already is quite short, the right knowledge and expertise can still do good work in the field of editing Girlfriend Chor.