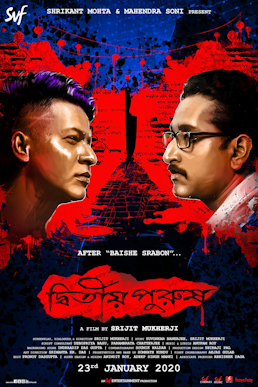 Khoka was a budding heinous criminal in the alleys of Chinatown, Kolkata in the year 1993. With three consecutive murders credited to him – a local gang rival, a police informer and a police officer, he was captivated by inspector Pranab Roy Chowdhury, who beat him up to the extent that he suffered amnesia.

Dwitiyo Purush Full Movie can be viewed on Hoichoi.

Fast forward to 2019, Inspector Abhijit Pakrashi, along with an assistant named Rajat, is given the responsibility of solving a case of murders committed by Khoka, who was recently released, after an imprisonment of 25 years. The entire Police Department had a strong belief that “Khoka is back” as the victims had the name of Khoka inscribed on their foreheads just like the victims of Khoka, 25 years ago, used to have.

Pakrashi’s personal conflicts with his wife Amrita continue as two more murders occur in the same style, one being a police informer and the other being Rajat. Finally, Abhijit gets hold of Khoka and is shocked to know that the convict known to be Khoka for the last 25 years is not Khoka but Paltan, Khoka’s best friend and lover.

Khoka was bisexual and Paltan was homosexual and they had a relationship since the days of adolescence. Paltan reveals that while he was made to suffer as Khoka for the last 25 years, the real Khoka was a patient of amnesia and hence sent to one of the relatives of the then Police Commissioner for a new life, and he has now become Inspector Abhijit Pakrashi.

At the end of the movie, Pakrashi kills Paltan and the fact that he had no amnesia but chose to lead a better life knowing very well what can happen to Paltan, got revealed through one scene—his affinity to Khoka’s favorite dish: Chicken Chowmein and Chilly Fish.

Of all forms of cinema around the globe, the sequel is considered to be one of the toughest forms. But when the director is a bigshot like Srijit Mukherjee, emotions play the role of the judge instead of rationality. Let us look at the different aspects of the film through the lens of the audience.

We often fail to find the difference between the script and the plot of the film. The script of Dwitiyo Purush when visualized from the perspective of the audience who watched its prequel Baishe Srabon, will hold no fragment of logic in it.

Baishe Srabon was a psycho-thriller. Hence it had its own flavor with a perfect blend of Bengali literature and blood thrilling experience, giving a beautiful angle of revenge in the garb of poetic romance. The script of Dwitiyo Purush displays the utmost inconsistency if you look at those characters of the prequel which have come down in the sequel. Abhijit Pakrashi, the protagonist of both of these films is portrayed as one of the most honest and diligent officers of the police force, who has one and only one inspiration in life—Prabir Roychowdhury.

This character has a lot of strictness towards the Bengali language and is an absolute perfectionist in terms of the pronunciation and usage of the language. In Dwitiyo Purush, this character has been forcefully stretched to undefined limits and hence has become almost an inconclusive and undefined character.

Abhijit Pakrashi is portrayed to be Khoka—a role played by Anirban Bhattacharya for nearly 90% of the film. Anirban Bhattacharya is revealed to be Paltan in the last scene. Maybe for some, it was very shocking, but for most of the audience, who viewed Abhijit Pakrashi’s character and understood it, it was nothing but an illogical and forceful surprise ruining the climax.

The love triangle between Pakrashi, Amrita Mukherjee and Surya Sinha is shown to be almost in the same position, with the only progress being Pakrashi and Amrita’s marriage. The script of Dwitiyo Purush might stand out as a masala potboiler, but it lacks depth and logic, so much so, that this pointless effort of commercialization has disappointed the audience to a great extent.

Looking at the casting section, there is almost no scope of criticizing the actors in this film, to any extent. However, as far as the dialogue delivery is concerned, the character of Amrita deserved to have a clearer throw of words. Abir did a fantastic job, which we can delineate as the role of a Supporting Actor. Pakrashi’s character got everything that it could have from Parambrata.

Another gem of an actor is nobody but Gaurab Chakraborty (Rajat). His acting just fitted the mould of Rajat’s character like a viscous jelly, filling every corner of the mould as and when required. But the one without which Dwitiyo Purush would not have been what it is today, the junior Khoka—Rwitobroto Mukherjee.

Standing as one of the youngest actors in the film, he proved that acting has no age and experience cannot overpower talent always. His mark as Khoka is the strongest, which got carried down to Anirban, another gem from the world of theatre to films. From perfect throw of dialogues, to singing “Jaadu Teri Nazar”, Anirban proved to be the epitome of spontaneous acting.

There are countless films, in which the music became far more popular than the actual film. Dwitiyo Purush is not an exception in this case. With names like Anupam Roy, Arijit Singh, Iman Chakraborty and Rupam Islam, it is needless to say that the music team of Dwitiyo Purush did a job beyond perfection. From the change of words in “Je Kawta Din” to apt use of background score, the music is too perfect for the inconsistent script of the film.

Soumik Halder (Cinematographer) did a fairly good job. Scenes shot in the middle of the Ganga, overflow of the emotions in a gay love story, and the brutality displayed during the heinous murders committed both by Khoka and Paltan were shot beautiful with no over usage of special effects. Editing by Pronoy Dasgupta is also commendable. No scenes were there, where the binding of the film could have been questioned.

Director is an actor, who plays every role of the film, silently. Even if we put all other characters aside, the central focus of the film is nothing but KHOKA. A heinous serial killer who inscribes his name on the forehead of his victims as his signature in Bengali. But when Paltan comes back after nearly 25 years and takes his place, he uses Khoka in English, despite being Khoka’s best friend and lover. Abhijit Pakrashi’s character is revealed to be Khoka, only through one dish – Chicken Chowmein and Chilly Fish.

At the end of the movie, it is revealed that Pakrashi didn’t suffer from amnesia. He knew everything from the beginning and he knew that Paltan was given the share of his punishment and sufferings. Yet he continued to lead his life and aspired to be an honest police officer. In Baishe Srabon, he revealed that his father was an alcoholic and whatever he became, it was a result of only his effort and determination.

But in Dwitiyo Purush, it is portrayed that Pakrashi’s parents came from a well to do family and no angle of alcoholism was displayed in the character of his new father. Prabir Roychowdhury from Baishe Srabon viewed criminals as his personal enemy, so much so that he didn’t even forgive himself at the end of the movie. And this person stood as Pakrashi’s role model. Pakrashi’s character is an emotionally sensitive character.

Despite remembering everything about his past, Pakrashi’s conscience did never shake him even once whenever he viewed Prabir Roychowdhury in his illusion. Coming to the character of Gora (later Jimmy), his face was clearly visible when the media footage post-Khoka’s murders as an adolescent were played. Yet it did not ring the bell in Pakrashi’s mind at first, while is portrayed to idolize Prabir Roychowdhury.

Overall, the structure of Pakrashi’s character has been deformed unnecessarily. Srijit Mukherjee, as the director of this sequel, should have viewed it through the audience’s eyes while directing the movie. Ironically, he somewhat underestimated his audience whose intellect has been built to some extent, over the years from a decade ago, through his film Baishe Srabon.

Despite glaring mistakes, large loopholes, and inconsistent script, Dwitiyo Purush didn’t fail to build a franchise, whose tagline can be framed as: 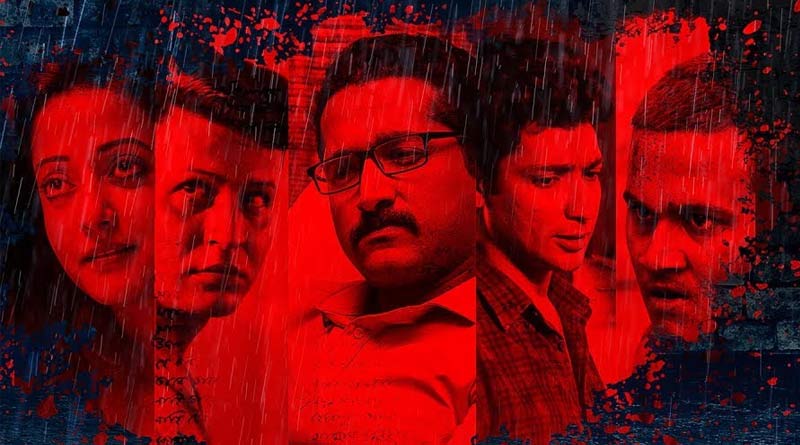