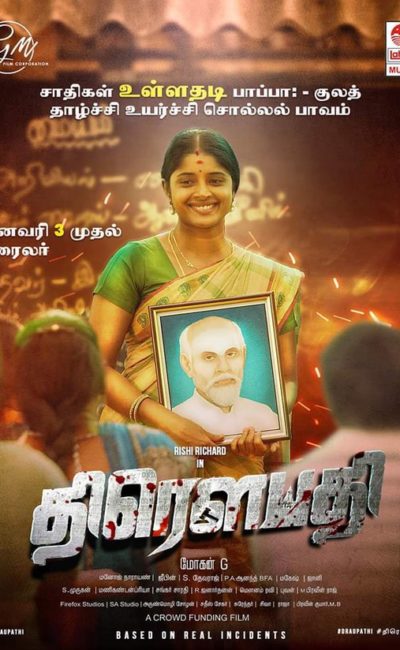 Draupathi is a Tamil Crime Thriller Film directed by Mohan G. The story is about the titular character, Draupathi and her supportive husband, Rudra Prabhakaran. Draupathi is a social activist in Senthamangalam, a village in Villupuram district of Tamil Nadu. The film opens with Rudra Prabhakaran, being released from jail, on bail. The background says that he was accused of twin murders as “honour killing” and the victims are his pregnant wife Draupathi and her cousin sister Lakshmi.

He commits himself to execute the vow of Draupathi and he is on a killing spree. Police Department is on its toes to nab the killer and inching towards him. Their family well-wisher Raniya reveals that Draupathi is alive.

What happened to Draupathi? Who killed Lakshmi? What is the vow of Draupathi? Did the police catch Rudra Prabhakaran? The film Draupathi takes it course right from the beginning just like a fast track court case and unfolds beautifully to a fitting end. Watch and enjoy Draupathi movie online on Amazon Prime.

Draupathi is a fast-paced screenplay. It is laced with love, crime, thrill, emotions, social message and politics in the right proportions. Fake marriage is the central theme of the movie and is a sure shocker to a naive audience. It draws inspiration by a fake marriage cartel unearthed in 2013.

Apart from fake marriages, Draupathi film discusses many socio-political issues. It portrays the flip side of the hydrocarbon project, MGNREGS (100 days wages scheme) and cola plants and their ramifications in a peaceful village. The director deserves applause for choosing such a complex and sensitive subject.

He has intertwined a love story and a crime thriller in this complex subject without slowing the pace of the screenplay. But he has carefully chosen not to preach anything. But the social message, he wants to convey, is best understood by the audience.

Director has chosen the right actors for each character. Richard Rishi has literally lived as Rudra Prabhakaran. Sheela is a delight to watch as Draupathi. Soundarya, Lena, Nishanth and Ambani Shankar have done their supporting roles well. Ilango and Gopinath have done commendable performances as the antagonists in Draupathi film. Karunas comes at the right time as a surprise in the film as an advocate. Almost everyone has scored well with their casual acting.

There are almost no logical flaws, no overdose of emotions, no unnecessary fight scenes. Two songs, “Kanna Moochi” and “Kukukukku” are jewels in the Jubin music. Draupathi film stands out for its good screenplay, acting and more importantly, the socio-political theme and message. For viewers, it is a must watch film. 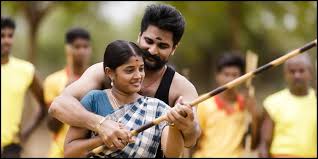