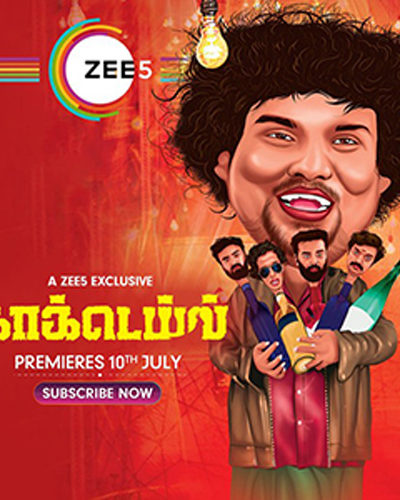 Cocktail, a Zee5 exclusive film has a hilarious plot involving boozed-up friends, idol smuggling racket, the murder of a young girl, a cockatiel, a pair of lovers, and a police officer. The credit goes to Actor Yogi Babu’s performance that Cocktail Tamil movie has a few streaks of comedy. Cocktail Tamil movie is written and directed by Ra. Vijayamurugan. The zee5 exclusive film is produced by PG Muthiah productions.

Cocktail Tamil movie is set in Chennai. Sayaji Shinde is the police officer in chase of the stolen multi-million worth idol of Lord Muruga (Karthikeya). Anbu loves the daughter of Sayaji Shinde. Anbu’s betrothal with his love interest is round the corner. Anbu and his friends plan for a cocktail party in the presence of a cockatiel, an important character in the film. Bachelor’s party in his apartment becomes a mad max party with a subsequent hang over the effect the next day. Friends wake up to find the dead body of a young girl in their bedroom. They get entangled in a quagmire of events as they try to dispose of the dead body without a trace. What happens next is told in a non-gripping, drag-style with a lot of hiccups.

Cocktail Tamil movie has got a weak script. The story-telling lacks sharpness, has boring sequences, and requires smart editing. Had the director concentrated on the story telling part more, Cocktail Tamil movie 2020 easily could have been a comedy thriller. The comical songs and boring “comedy” drags the movie.

Anbu is a young man aspiring to settle in life. Accidentally he finds a cockatiel in his apartment. The retrieval episode leads to its owner, a young girl, daughter of a police officer. They fall in love with each other. As their engagement is round the corner, he is caught up in a wild bachelor’s party with his friends. The story just moves without head or tail and trying to connect dots is left to the viewer.

Another subplot is the mock seizure of an ancient idol by police to bring out the original millions-worth idol from the hideout. The subplots are incoherently connected. Cocktail Tamil movie has a total running time of 2 hours and 7 minutes.

Sai Bhaskar has scored the music, and lyrics are penned by Vivek Ravi.

J. Raveen is the cinematographer. G. S. Muthu is the colorist. Santhosh has done the choreography. S. N. Fazil has edited the Cocktail Tamil movie. 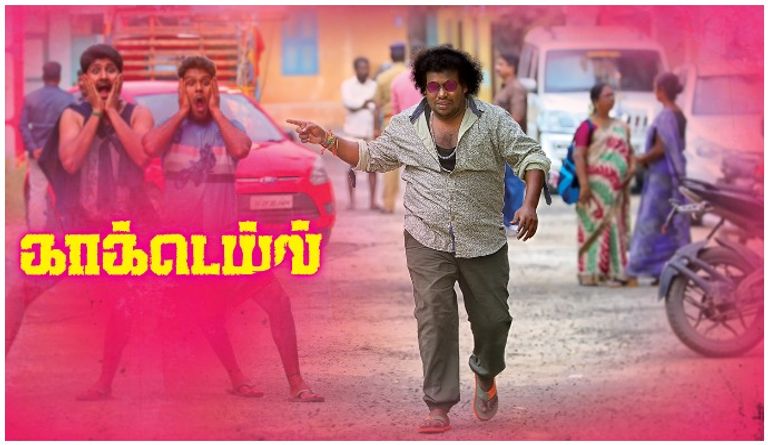