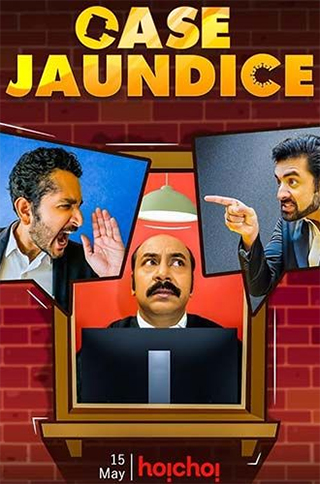 Hoichoi web series Case Jaundice is a collective mini-series of 5 short independent episodes where two lawyers, Mr. Sen and Mr. Das take the sides of a group of people, people as a whole, coronavirus, families, and offices. Sounds weird, right?

Well, the sole aim of releasing this mini-series with the maintenance of strict social distancing rules, is to point out certain factors that bother us, but we keep on ignoring them continuously. If there’s a case of family vs offices, then both the lawyers try to point out why is their part important, or to be very specific, their client is important. On the other hand, the judge focus on effective listening of both sides and tries to draw a conclusive solution—sometimes giving the verdict in one’s favor, and sometimes bringing forth a neutral solution. In reality, no one is completely wrong. And that’s the main idea of this series.

Bengali Web Series Case Jaundice Review: A boost of humor in a time of limitations

The daily issues of life are less talked about. So, Case Jaundice Hoichoi brings the audience a mini-series of all those problems, talked about with different perspectives, logic, and justifications.

Script: The script of Case Jaundice is one of the most ideal examples of a crisp and compact mini web series. With absolute to the point deliveries, the series shown that without even objecting each other or blatantly shouting at each other or by attacking each other on a personal note—lawyers do exist. The first hearings of 5 independent cases—presented beautifully, with the judge drawing perfect conclusions from each of the lawyer’s statements, is absolutely a rare case in court dramas. The script is so engaging that even for one second the audience won’t even get a taste for boredom.

Acting: While Parambrata sparked up his character every time with his usually delectable delivery and change of expressions, Anirban Chakrabarti balanced out his character quite well. In such kind of roles, the judge becomes a completely comic character. But he made a wise balance of humour along with a finely touched sternness so that no one would take him lightly. Ankush’s performance was also nice, with a little bit of over-expressive tendencies.

Music: Background scores in Case Jaundice have not played any significant role. However, Amlan and Bob Sn made a good team of music.

In the limitations of lockdown, the extent to which cinematography and editing were managed, is undoubtedly beyond appreciation. It became truly evident that there is no way the force can stop you if you want to do your work. The ways might change, but the performance will never get affected as such.

With minimal efforts spent in characterization, Subhankar Chattopadhyay’s vision towards Case Jaundice 2020 is surely commendable. His online direction, the casting members’ online performance—these collaborative efforts gave birth to an absolute entertainment booster of nearly one hour. The brevity of the series added to the flavor of humour as well as the core opinion of the characters.

The to the point design of the script, deliveries, angles of the camera especially in the lawyers’ houses—everything was taken care of with omission of the drawbacks to the extent possible. However, a little more effort in the designing of the judge’s character could have broken the monotony before the beginning of the cases. None the less, Case Jaundice is a very well-directed series, that deserves to be watched.

Case Jaundice Episodes can be streamed on Hoichoi.