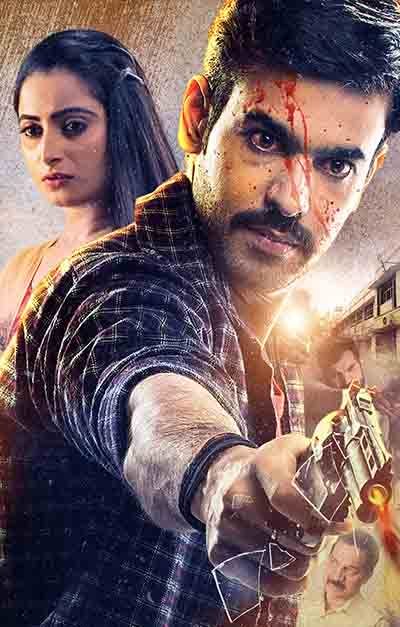 Madhuri Talkies is a taut, well-scripted Action Revenge Thriller, where Manish (Sagar Wahi), a Benaras lad avenges the violation of his Lady Love Puneeta (Aishwarya Sharma). A land, where Crimes against women, shaming the violated woman, and the victim committing suicide out of social pressure, is a norm, Manish is angry, perturbed, and serially murders the 5 Rapists of Puneeta across the 10 episode series.  Madhuri Talkies in its rather graphic depiction and several replays of Rape Sequences across the series shocks the viewers, but makes a very solid point that women are not merely objects of desire and consent is her right.

Madhuri Talkies Review – Women Are Not “Objects Of Desire”

Benaras, the spiritual capital of India. Bunch of Guy Friends sitting on the Ghats of Benaras, chants of Holy Bells from the temple, with one guy having a chat with his Girl Friend on a phone put on Speaker Phone:

Benaras, where Rape videos of innocent girls are circulated for paltry sums, only for the vicarious sensual pleasure of youth, Manish takes up the onus of taking revenge for Gang Rape of his love interest Puneeta. The series shows in reality the hypocrisy of our society wherein as long as the rape is not happening to someone loved, it is just a video to be enjoyed or a pleasure to be had.

There are multiple instances in the story where this social hypocrisy is depicted –Manish is fine with his friends enjoying Gang Rape Videos, but not of his love interest. Another instance is when one of the Rapists of Puneeta commits suicide after his own daughter is violated.

It also brings to fore the dilemma of an otherwise doting Parent, who asks his own daughter to not file an FIR report, after her Rape. He slaps his own wife after she tries to speak up for her daughter’s pain. The Web Series depicts some violent murders and rather graphic depictions of both Rapes as well as Murder, multiple times. Viewer discretion is advised. The Dialogues are expletive oriented and capture the colloquial feel of Benaras very well.

Sagar Wahi is a good actor and he has managed to get in the skin of his character. Another amazing find of this series is Manish’s Best Friend essayed by Basu Soni. Powerful performances by the entire star cast most notably by Varun Kashyap and Aishwarya.