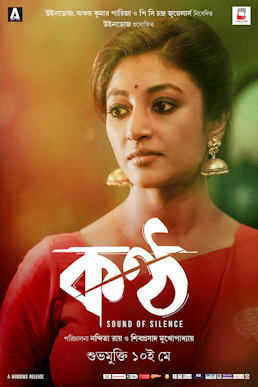 Konttho Bengali movie begins with the happy and successful life of RJ Arujun Mallick who gets an award for his phenomenal performance as the Voice of the Year. His wife Pritha is a news reader and they are blessed with a 7-year-old son, Tukai.

The family is blessed with a small group of Arjun’s colleagues of which Indrani is the closest mutual friend of both Arjun and Pritha, right from the days of college. Fate takes its own turn when Arjun is diagnosed with the 4th stage of Laryngeal cancer where surgery and omission of the voice box is the only option left for survival. Arjun survives but shuts himself in the dark world of depression.

After feeling the importance to at least speak, Arjun meets Romila, a speech therapist, who is a divorcee from Dhaka with a daughter, Saheli. Slowly Arjun begins to speak, not with his usual voice though, but with a different voice texture and to keep him involved and not left out, his friends decide him to get featured in a new show for the same radio station, the show entitled Juju. Arjun starts off and proves himself, yet again.

Konttho movie review – এভাবেই ফিরে আশা যায়. With family by one’s side, one can make a come back with a bang.

Konttho movie is not just a tale of a cancer survivor. Konttho is a complete story of a real warrior and the ultimate proof perhaps that man is a social being. He or she cannot survive alone. A person can overcome all adversities easily and quickly only when he or she gets complete support from the family and friends.

Konttho is a social message of encouragement and hope present with strong roots of reality embedded in the family background of a middle class Bengali family where everything exists—the pain of not being able to do what one loves the most, the pain for a man to hear that he has become a burden for his wife, the pain for a son to see his jolly father becoming a complete stranger—everything is presented in the script with utmost expertise.

Indrani’s character, being a side role, has been sculpted out like an ideal supporting character. It delineates the real importance and value of friends in our life. Friends who don’t make us feel their presence through daily actions, but their absence bothers us, for they are the ones who promise not to leave us alone, never judge us, even when we start hating ourselves. The script of Konttho could not have been any better; it completely satisfies the needs of the movie, thereby acting as a good mediator between the plot and the screenplay.

Cancer is not just a disease. It is a complete halt in the normal life. Thus, life of a person completely changes before cancer and after surviving cancer. Shiboprosad Mukherjee served both the “Arjun”-s of the film with all his heart, diligence and determination.

From a romantic voice filled with motivation to a voice emitting nothing more than strains of forced breathe and then finally the mechanical voice post speech therapy and above all, speaking through the oesophagus with the help of small burps—his performance deserves more than a standing ovation. Paoli Dam played the perfect Pritha who is an emotional, supportive, hopeful, light-hearted and a little jealous wife.

Jaya Ahsan nailed it with her unconventionally outspoken and open-hearted performance as Romila. She really swept in as a fresh zephyr of spring in the dark times of the family. Koneenica Banerjee did no less to portray the character of Indrani, who played the role of an ideal friend.

When Anupam Roy stands as the music director of the movie, there is almost no scope of negative review. Each and every song as well as background score justly brings out the flavour of love, pain, celebration and of course, coming back with a bang.

Subhankar Bhar utilised every single scope of good cinematography. Special mention requires the scenes of Kolkata, the performance of Arjun as an RJ, the dripping of rain drops from the edges of a fancy umbrella—Konttho could never have a better cinematographer. Moloy Laha is also showed good editing skills in the movie.

Nandita Roy and Shiboprosad Mukherjee have jointly gifted a number of good films to the Bengali film industry. Konttho can be called their best work after Muktodhara (2012). Acting and Direction, both were done by Shiboprosad with absolute expertise.

Konttho is a well- directed film were every small detail was taken care of, the perfect balance between what one feels and what one should actually do is well manifested. The social message through the film was coupled with apt dose of entertainment, emotions and comic reliefs. Nandita and Shiboprosad deserve a huge round of applauds for their work in the film. 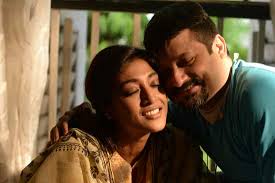