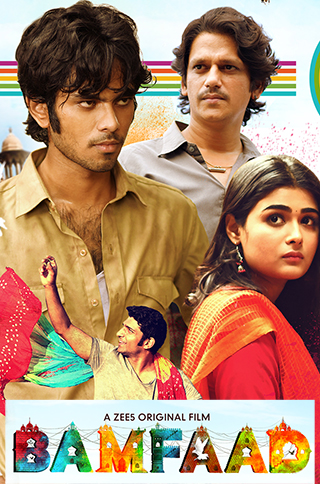 The story of Zee5 original film Bamfaad encompasses gangster lifestyle, romantic plot, and sequences of actions in the city of Allahabad. Nasir Jamaal is a passionate soul with intense character, who loves and hates with equal intensity. He is supportive of his friends and has the guts to stand against the local gangster Jigar Fareedi.

Co-incidentally, he falls in love with Jigar’s mistress, Neelam. Jigar manipulates situations in such an order than Nasir accidentally kills Rajib, one of the members of Jigar’s gang. Eventually, he manages to run away with Neelam to Lucknow. However, things do not turn out in their favor and both of them are forced to return when Nasir finds that his mother had passed away in the meantime.

Sadly, Nasir’s father was also shot dead by Jigar’s men. Finally, Nasir and Neelam injure Jigar and flee. Nasir boards a train for Neelam and promises her that he would find her one day if he remains alive. While Neelam goes for a new life with the hope of meeting Nasir one day, Nasir surrenders himself to the law.

Bamfaad is more of old wine in a new bottle. However, the film does end on a different note.

The script of Bamfaad movie stands quite predictable and monotonous. These days there are so many films based on gangsters and their lives, with the tinge of romance that Bamfaad doesn’t seem to provide anything extraordinarily new. It can surely take you back to movies like Gangs of Wasseypur and series like Mirzapur and Ek Thi Begum.

Aditya Rawal did justice to the character of Nasir as his debut performance in Bollywood. He mingled with the personality of the character so much so that Nasir Jamal perhaps could not have got any actor better than him. Vijay Varma was also an apt choice for the character of Jigar Fareedi.

Background scores and songs have played a very important role in Bamfaad. Vishal Mishra has done a good job as the music director for the portrayal of the pressure and dilemma throughout the film.

In a film like Bamfaad, cinematography could have been given a little more important than it actually got. Some good implementation of special effects could have broken the monotony of the script. Editing also lacked the expertise to some extent. With a little more attention to editing, Bamfaad wouldn’t have lost its gravity at different places.

Ranjan Chandel as the director of Bamfaad could have put in a lot more into the film. A broken narrative is dangerous for the fate of a film. He could have given a little more insight into the social backdrop, with a good narration running in the background explaining the time, the period, the background of Jigar Fareedi.

Neelam’s character could have been explored a little more. Nasir, a man who was so passionate about his friend that he threw stones at a bee-hive, could have never left his love, Neelam in a train without money. Apart from that, after Nasir returned to Allahabad and surrendered himself, Jigar’s character deserved a cleaner representation.

It was evident that when Nasir and Neelam fled for the second time, Jigar was not the same man. This could have been elaborated a little more, to depict whether his persona at all underwent any change, or the display of some soft emotion in his character was just momentary. In short, Bamfaad could have told a lot, and in a much different and realistic way.